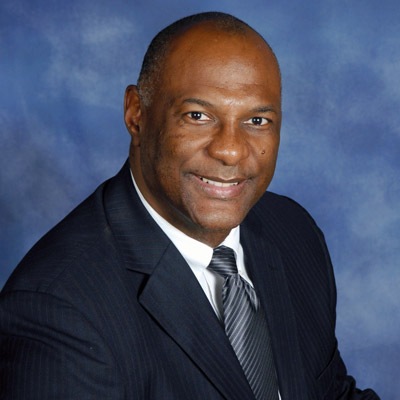 In 1985, he was drafted by the now-defunct USFL football league. Rev. Hooper however, opted to join the National Football League's Pittsburgh Steelers as a free agent, and played the position of running back with the organization from 1985 through 1986.

He attended Rutgers University in New Jersey on a full athletic scholarship and majored in Business Economics.  Rev. Hooper received his Master's in Theology from Regent University School of Divinity in May 2008.

Rev. Hooper was licensed as a minister on February 8, 2004 and currently holds the position of Executive Minister.  In this position he manages all of the day to day operations of the church as well all financial operations.  He is the acting chairman of Largo Community Church in the absence of the senior pastor.  He is also the Executive Director of a Largo Community Ministries a nonprofit corporation which serves the local community of Mitchellville.

His hobbies are; training athletes, watching sports, reading, traveling, and spending time with his family.  He also serves as a Blue Gold Officer for United States Naval Academy, in which one of his responsibilities is to help guide young people through the rigorous entrance application process of the Naval Academy.

Dwayne and his wife Patricia have been married for over 26 years.  They have been blessed with three children: two sons (Dewayne (DJ), and Grant); and one daughter (Clarke).  DJ a 2013 USNA graduate is now serving in the Navy, Clarke a freshman at Mount Saint Mary University and Grant is a junior at Saint Mary Ryken High school.

It is with much joy I greet and welcome you to the Largo Community Church.

Sign up today to receive updates on church events, special campaigns, closings and/or receive the Church Newsletter via email.

© 2021 Largo Community Church. All Rights Reserved and Terms of Usage.